In this line of work you spend a lot of time not knowing when the next gig is, or who it is you might be working for. Musicians aren’t exactly known for their organizational skills and timeliness. When you’re a hired gun, you have to make a living by being the ‘constant’ in a world of ‘highly variables’. 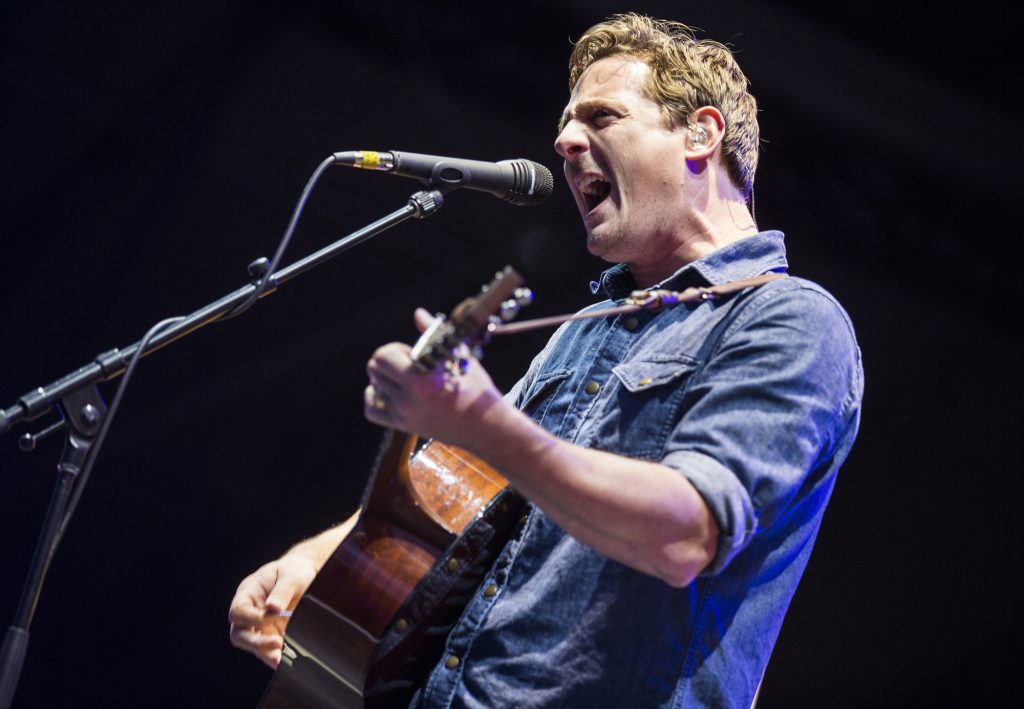 In my role over the last 6 years as the house recording engineer for the legendary 1st Avenue Mainroom in Minneapolis, MN, many times I have received a call at 3pm saying “the band is loading in and they were wondering if you could make it down to record?…. *dramatic pause*…. sound check is in 45 minutes”. My answer is, invariably, “yeah, see you in 35″… and then I figure out how to work my day around that.

On this Sunday in June, I was working on something, I am sure, although I can’t recall what it was, because the rest of the day was going to be the thing my limited memory would take the energy to store away.

“Hey man, Sturgill Simpson is loading in and he wants to know if you can come down and record the show tonight for some radio show?”…. I thought for a second… People tend to think that, because I work in the industry, I should know who just about everyone is…. I don’t… I spend a fair amount of time completely engrossed in particular projects and rarely get out to see a band who I am not recording. If anything, this career has limited the amount of time I spend listening to whatever is ‘hot’. I don’t even watch the Grammy’s!

“Who’s he?“, I asked…. “You’re going to LOVE this one“, Greg replied “Everyone’s coming down for it. We don’t have room on the floor at Front Of House, so we will have to set you up in the garage.”. That sounded like a challenge to me, “See you in an hour”, I replied. “Can you make it half an hour instead?”. Greg likes to challenge people regularly, I think just to ensure that they keep sharp, but maybe a little of it is sadistic? Maybe a lot. “Yeah, sure”, I rose to the bait. I always do.

I pulled into the garage in back around 35 minutes later. (You gotta let them know you’re struggling to keep them happy, you know). It was a hectic mess. A huge tour bus in the garage with several trailers. Conrad is never in a good mood and usually even less so when he sees me show up. When I arrive it means things are going to be just that much more convoluted for the stage manager. “Why you gotta drive that big truck? I can’t park you in here tonight.” he snarled at me, and then directed me up along the bus, to the same spot he always parks me. “Thanks Con”…. “Grmmmblle” he replies. 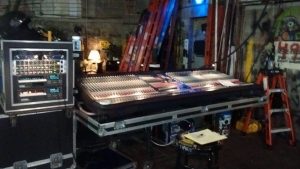 The rig in the garage

People were hustling everywhere, that’s a pretty regular scene by the time I arrive. What’s not is that they were using their own Front Of House board, which meant that my standard patch into the house console was not going to work. Fortunately Greg already had a work around for that. The 48 channel Midas console, normally reserved for FOH, was set up in the garage, with my recording rack right next to it. That was great, but I still had to set about patching everything into the stage feeds.

I was significantly behind when the sound check started and hustling to get my settings while keeping track of everything. 35 tracks of audio, taking notes for later and monitoring input levels simultaneously. By the time soundcheck was competed I was dialed in and ready for the show. Time to relax.

I still had no real idea who was in the house, but I knew it was important. All the big wigs were there including the staff, managers and owner. There was even a “meet and greet” with the press and interviews.

After sound check the band came back to the garage to hang out. They always do. I finally got a chance to meet the boys in the band and Sturgill. Despite being the “main attraction”, everyone was very casual and good natured in the garage. They always are. We hung out and chatted a little before we all wandered off in our own directions.

They were sounding great for the sound check and the energy in the club was high. The band was huge, including a full kit, a bass, several guitars, trombone, saxophone, trumpet, Moog, Mellotron, Lesilie, pedal steel and 3 vocals.

When the house filled out it was well beyond capacity, 1600. It was the largest crowd I have ever seen in this club and I have seen some pretty big shows. Although I didn’t have my regular perfect location for watching the show at the FOH board, I had great sound in my headphones and, every once in a while, I would go to the stage door and take a peek inside. JAM PACKED, there was no sense in even trying to get through the crowd.

The show went down without a hitch. The crowd was a deafening roar between songs. (adjust those crowd mics a little) and we got the tracks he needed for a radio interview he had done. I went to the club not knowing what to expect and walked away amazed by the show and grateful for having been a part of it all.

Sunday night, February 12th 2017, Sturgill Simpson took to the really big stage to accept his hard earned Grammy for Best Country Album “A Sailor’s Guide to Earth”! I can’t say how happy I was to record A Sailors Guide To Earth Tour in when it hit our humble club in Minneapolis.