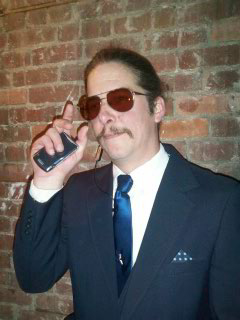 – John been in music since he was around 8 years old learning guitar.  Has played in many bands, written and recorded music, made music videos, been a sound engineer for a number of bands and clubs, has played with Cheap Trick Drummer Bun E Carlos, Grant Hart (Hooskerdu’ fame), and Chris Dorn (of the Beatifics).

He has also produced a number of video projects for a number of different things.  From Cable TV Programing to Documentaries and Information and Training Videos for companies.  He has worked in every position from cameraman, grip, sound tech, to final production.  Sparky has been involved in every step to from Grip to  complete production process.  With his ear for music and his eye for the right video, photo, shoot the editing experience behind him, along with the technology available to him, Sparky will provide your project with a finishing touch you will not believe.

Sparky got his nickname from Marc and Brian of then Altered Ego and today of the band Free Fallin, the #1 Tom Petty Tribute band in the nation, while running sound for the club Froggy’s in Pine City MN.   While there he worked with bands like 10,000 days (Tool Tribute Band), Free Fallin (Tom Petty Tribute Band), Black Days Down, Blackout, Tangent, Roy Flowers, Billy Ugly, Frantic, To The Core, Angst, Beautiful Noize, Scarce, Fugly Duckling, Cryptic, Sick of Sarah, Shadow Stone, Altered Ego, Psyco-Flip, Down Rigger, Troy Castellano, Smiling Politely, Tuff Little Wang, Side Car to Saturn, Drift Effect, Scarlet Haze, Stricken, Yasen Marie, Make Shift, and many many others in his years of running sound at the club.  Since then Sparky runs sound, and works freelance and is now focused on our projects in Video and Audio Recording and Editing.

– recording Audio & Video.  He has been involved in every step of the process and brings an unique view and eye for what works.

– editing – Audio Engineer – From recording, editing, mixing, and mastering, to full production.  As a musician to sound tech he has run every position when it comes to sound reproduction either live or recorded.

– Recording – Live and Studio Recording.  As a musician and friend of many bands, he has been in the Live recording and studio environment and knows his way around both.

– Running sound – in a live or recording environment. From years of running sound in clubs and freelance for bands and also his own work being recorded he has been involved in all aspects of the live or studio environment.

Sparky has been named one of the TOP SOUND TECHS in Pine County by the many bands he has worked with.  He has an intense knowledge of sound re-enforcement, and also trouble shooting on the fly.  At the same time he also knows about lighting in order to make sure the “look” is what you want to achieve.

– Studio Information – Sparky has built a studio mixing room in the basement of his lake home.  Sparky Studios as we call it is where Sparky has recorded John White, a Pine City Artist, for his demo CD and mixes and masters for Slippery Wrench Productions.

You will not go wrong with Sparky on your Team.

1969 – Started playing guitar and eventually lead to playing for the neighborhood in the garage.

2009 – Began work as a recording engineer with a Roland DAW.

2010 – Recording Engineer for The Tisdales, The Rockford Mules, Petty Demons, The Glean, Crossing Guards, Blackout and far to many more to list here